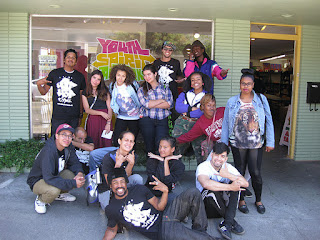 I tell Charles at the YMCA that I’m bringing Ishmael Reed to class. He says, “he’s great, an old warrior,” and then adds “where are the young warriors?” And I understand that lament. So, even in the era of the youth-led black lives matters movement, that generation gap exists. Some of the old feel they let down the young, while some feel underappreciated by the young. Some feel both. Oba T’Shaka makes the connection between the generation gap and the “integration trap.” Indeed, the "generation gap" was one of the main weapons by which the white supremacists inserted themselves into the black community as "necessary" (or at least “unavoidable”) mediators. Ishmael addressed this in The Preacher and the Rapper, among other places, back in 1992 (and today there's generation gaps not only between hip-hop and pre-hip-hop, but also within hip-hop).

And Charles and I talk about how the folks at the Pleasant Grove Baptist Church rally on Adeline Street in response to the noise complaint also lamented about the lack of young people present (and this is not too different from the old bluesman complaining that it’s mostly young whites who care about their music)—even with the strategic alliance with the younger Samba Funk drummers who were also subject to violent police harassment for playing drums at Lake Merritt after a white newcomer tried to shut them up (and I think back to New Orleans Congo Square police actions of lore).

But next time I see Charles, I have to tell him there are younger warriors; you just don’t hear about them—and that’s another way the white power structure keeps dividing to conquer. But I also need to tell Charles about D. Scot Miller introducing Ishmael, or about Khafre Jay and Malik Diamond coming into my class. Listening to these non-academic (or trans-academic) public intellectuals talk to my composition students, I feel my students were roused, minds were blown, by what they said; seeds were planted. And it’s telling that when they asked my students if they had ever been to a live hip hop show (or any live music for that matter), only about 5% said yes. And when they asked my students if any of them enjoyed public speaking, no one really said yes.

I personally would love to see Malik and Khafre publish a book and it would blow away Jay Z’s Decoded or Russell Simmons' meditation book. Huey and Bobby wrote books, but the book may not be so necessary to teach the art of public speaking, and the art of organizing (white culture does have a tendency to overemphasize paper, or these days, e-paper).

Khafre and Malik have a radio show on KPOO in addition to their grassroots activist and educational non-profit organization. They understand the importance of working locally to take back hip hop and music culture from the corporate industry, and extend the tradition just like the old personality radio DJS of old--back in the R&B era like DJ Roscoe on KDIA, or even, say, Sly Stone, before the San Francisco scene turned on him (“I know how it feels to get demoted. When it comes time you got promoted”) and he had to go national to make a decent living expressing his artistic vision (Tupac also felt he had to go to LA, or Too $hort to Atlanta).

Yet, even with the war against local music, and “conscious” hip hop, as well as the displacement of the black community, Khafre and Malik are sticking it out, and working locally. They are absolute gifts to the culture of the Bay Area, but, alas, too little of the Bay Area knows they are righteously working for, fighting for them. They are warriors for music and the liberation of black and brown and all oppressed peoples. If they were more supported economically on their own terms, they could do more for the revitalization of Oakland’s culture and economy than any tepid talk of an “arts commission” currently being floated by Oakland’s mayor or city council.

& check out this song by Malik Diamond: https://malikdiamond.bandcamp.com/track/system-crash

Posted by Chris Stroffolino at 11:43 AM