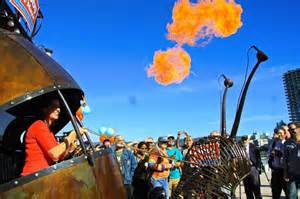 Mayor Libby Schaaf has a fascinating way of using words to address pressing issues that this city faces. This month’s example comes from the East Bay Express article, “Will Oakland Lose Its Artistic Soul?” by Sarah Burke. Let’s line it (like poetry):

Schaaf said
the Kenneth Rainin Foundation,
a major funder of the arts,
has agreed to partner with the city
to move forward
with some of the strategies
presented by her task force.

The Rainin Foundation
recently formed its own working group
to conduct a study of Oakland’s art ecosystem
to identify how best to support these strategies, said Schaaf.[1]

At some point, we’re lead to believe, this will lead to the Rainin Foundation dropping a big check to fund local artists. Are you excited by the possibility?
Are you a little curious about how Mayor Schaaf managed to persuade these art patrons to “agree to partner with the city.” Did she offer economic incentives to Rainin? If so, what and how? And how much money did she spend on her “task force?” And why does the mayor feel the city needs, in addition to the “task force,” the extra bureaucratic layer of Rainin’s “working group” before anything can happen?

Does the Rainin Foundation solicit, encourage, or welcome community imput? And, if not, why not? Why doesn’t the reporter, Sarah Burke, publish an email or other contact information for both Rainin’s “working group” and Libby’s “task force?” Will there be any money left for “the arts” once all the salaries of the task force and/or working group are paid?  These are but a few of the questions these paragraphs (or stanzas) leave unanswered. The article continues:

When asked for a general timeline,
she offered only that “work is underway.”

If I received such an answer from a student who didn’t turn in his homework assignment, that student would not likely pass the class, especially when she doesn’t even understand the assignment (which she gave herself when she declared 14th Street a Black Arts District, to name but one)—unless, of course, the assignment is precisely this: to do nothing—or even worse than nothing—while pretending to address the crisis (i.e. spending money “on the arts” that never gets to artists, but then she can announce herself as a patron of the arts because she’s thinking about appointing a Cultural Affairs Manager who would then oversee the Oakland Arts Commission which she wouldn't think of re-instituting without a Cultural Affairs Manager)--but she's not a student; she's the mayor and doesn't have to listen to us: the art snail knows how to speed up very fast when it's driving away from us in time for a meeting with Bay Development, Wood Partners et. al. 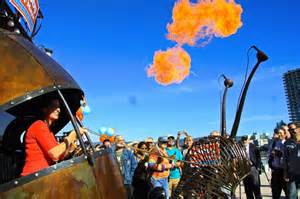 Posted by Chris Stroffolino at 9:13 PM