What to say?
Too much to say…too much that needs to be done…
I am humbled, inarticulate...
How to deal with this loss, this pain….
I stumble…and can not do justice….
But I must write something now….even if it is all wrong….
And please feel free to criticize….

I first got into Baraka’s work in college during the 1980s, through white establishment literary anthologies. Both the Poulin Anthology of Contemporary Poetry and the Norton Modern Poetry Anthology included his poems---more from the “Le Roi Jones” era, but at least some from the Black Nationalist period; a tremendous range of work---from the more subtle lyricism that endeared him to the white avant-garde establishment to an internationalist revolutionary didacticism he had to fight and sacrifice for.[1]

His performance of “Wailers” in Naropa’s Poetry In Motion movie showed me another dimension to his art---the combination of music and poetry much more effective and deeper than, say, Ginsberg. While some of my teachers refused to acknowledge Baraka’s direct political didacticism and songs could qualify as “poetic art,” Baraka managed to open up these genres as viable possibilities in poetry and letters. Baraka came at me from all angles. Before I had even seem him perform live, I saw the film of The Dutchman….But one facet…. 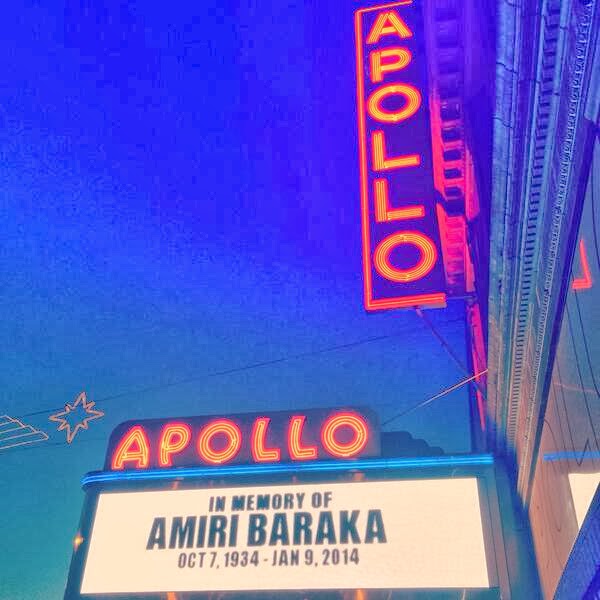 2.
In December of 2011, in Rochester, New York, Baraka spoke of his intentions in his 1964 play, The Dutchman: “The play becomes clear if you focus on the time it was written….Because he’s actually killed for what? Leaving [the white woman, Lula]…’I’m gonna leave. I ain’t gonna be with you. I’m gonna be with who I want to be with….’ What I was trying to say is that there was change coming, and what you thought you were dealing with when you were dealing with the black and white thing was not reality because black people’s thing had never come out yet….When Clay comes up after he’s been fooled around with all that time…it’s the opening of a revelation.” Here is the climax to Clay’s speech from the play:

But listen, though, one more thing. And you tell this to your father, who’s probably the kind of man who needs to know at once. So he can plan ahead. Tell him not to preach so much rationalism, and cold logic to these niggers. Let them alone.
Let them sing curses at you in code and see your filth as simple lack of style.
Don't make the mistake, through some irresponsible surge of Christian charity,
Of talking too much about the advantages of Western rationalism, or the
Great intellectual legacy of the white man, or maybe they'll begin to listen.
And then, maybe one day, you'll find they actually do understand exactly
What you are talking about, all these fantasy people. All these blues people.
And on that day, as sure as shit, When you really believe you can accept them into your fold, as half‐white trusties late of the subject peoples, with no more blues, except the very old ones, and not a watermelon in sight, the great missionary heart
will have triumphed, and all of those ex‐coons will be stand‐up Western men,
With eyes for clean hard useful lives, sober, pious and sane, and they'll murder you.
They'll murder you, and have very rational explanations. very much like your own.

Almost immediately after Clay says this, Lula stabs him, as Baraka puts it in 2011:

Why is he killed? Because he wants to do that by himself. “I’m the great Black poet. I’m here. I’m going to express myself.” You can’t make change by yourself. You either get killed, put in jail, or get robbed. So that was the lesson that I was trying to teach….”

Clay’s “revelation” is similar to Jones’ (Baraka’s), but Clay speaks of “these blues people” in the third person (“My people. They don't need me to claim them. They got legs and arms of their own”). The revelation that Jones/Baraka had about “the black and white thing” during this time made it clear to him that he couldn’t speak of “his people” in the third person, and of himself as an isolated individual, especially after the death of Malcolm X in 1965. As he puts it in 2011, “Black people’s thing had never come out yet….” Moving to Harlem, and forming the Black Arts Repertory Theatre, and aligning with the Black Nationalist movement, could effect this change, by helping to create economic self-determination; to bargain with the dominant white society from a position of collective strength….or as he puts it in a later poem:

As in Clay’s speech, Baraka also engaged in one of the most adept and astute critiques of the philosophy of “logocentric” (and Euro-centric) rationalism, putting in words much of what was expressed non-verbally in the jazz, blues, and r&b he loved and theorized—but not from the perspective of the “irrational revolt” so touted as the spirit of 50s/60s counter-cultural intelligentsia in middle-brow venues, nor from the perspective of post-structuralism. Rather, like, Fanon, for instance, such critique (whether in a ‘rational’ mode, an ecstatic mode, or an angry mode, to name but three) was rooted in the class relation and always in the service of re-constructing a new reality.

What primarily distinguishes him from most Marxists is his analysis of music, not as mere transcendence, but also as political/cultural expression. In his writing about music, from Blues People onward, he out-theorizes his detractors on both the “left” and the “right” in part because his theory grew out of his practice as much as the practice embodied the theory. Not “officially” a musician himself, Baraka learned from, felt solidarity with, and even taught many of the best musicians (from jazz to soul to hip-hop). His lectures and “poetry readings” at their best approximated the “structured improvisation” of jazz. He’d take his solo and then trade licks with a musician or verbal interlocutor on stage, pushing the boundaries of an “interview” or “panel” format. More than anyone I’ve seen, he opened his performances up to the audience, inviting hecklers. He listened, responded, contemplated and wrote, furthering the American (and international) political/cultural discussion on both a macro and micro level: seeing forest and trees (if not necessarily at the same time).

Baraka used his status as a poet sanctioned by white society, to bring a more decisively black vernacular lexicon into poetry than had previously been permitted. At the same time, he restored poetry to its pre-modern specialized role, as a practical art (encompassing theatre, history, religion, philosophy and, of course, music), even while being firmly rooted in the 20th century and the ever changing same of the present (the continued legacy of slavery, Jim Crow, the economic racism of the north, and the prison-industrial complex).

He worked on so many fronts, spoke/wrote (from so called ‘high’ to ‘low’) to help build the necessary coalition, the united front.

As he pointed out repeatedly, The English Department is one of the last vestiges of imperialism, and even while black music made strides in mid-century America as American music became less segregated, Academic English (and Creative Writing) Departments still makes less room for the “Black Art” aesthetic(s) than even this commercial corporate mass culture does. Many whites acknowledge the greatness and influence of black musician (even if it is distorted as Baraka points out) more than white poets and literary types acknowledge an analogous influence in literature, for instance.  Alas, rather than seeing progress in English Departments on this front, we now see even the mass-culture has become increasingly re-segregated in the past 35 years. This is clearly part of the work Baraka did that needs to be continued, and he provides us with many of the intellectual, rhetorical, and artistic tools for that struggle.

It’s one thing for English Departments to remove the Shakespeare requirement, but why not replace it with a Baraka requirement in an interdisciplinary team-taught class with sociology, political science, and music departments. The syllabus could include DuBois, John Coltrane, James Brown, Sun Ra, Marx, and Stevie Wonder for starts. And if Academia won’t do it, start one’s own school and cut out the white academic middleman and their increasingly less valuable degrees---in the spirit of self-determination a la Malcolm X.  This is not simply “Black Studies,” for Baraka understood that in America, Black Studies IS white studies…..

Understanding the time in which it is written....true of so much of Baraka's work. His criticisms of Italians when they ran the power structure of Newark never offended me as an Italian-American. And the laughable charges of anti-semitism because of a few lines asking questions about Sharon's knowledge of the 9/11 attacks....

He has influenced my work, especially my work in the classroom, but also in prose essays more than in my published poetry (for instance my piece, "Sly Stone And The Not-So-Great Fillmore Whitewash," is deeply infuenced by his theoretical framework established in Blues People)....

I had the great privilege of attending the events he and Amini hosted in the basement of their home (The Spirit House) in Newark, and vowed that someday I'd be in a position to help continue something like that....It may never happen now, with me....but I am heartened to see his spirit live in so many amazing, beautiful, and intense younger writers in these bleak times...


[1] In subsequent editions of the Poulin Anthology, Baraka had been removed, and many of the “Black Arts” writers who had appeared in the 1972 Norton Anthology had been taken out of the next edition in 1988.

Posted by Chris Stroffolino at 9:01 PM