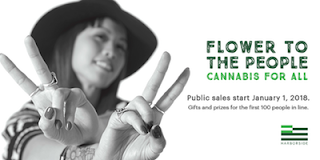 (too long for a tweet; too topical for a poem)


It’s 2017, & the billboards claim “Victory”
& evoke 1960s “radical chic”…
Men & women, black & white
smiling, flashing the peace sign
that was originally the victory sign
(closer to the camera, the V
is bigger than the face)
as if the culmination of a 50-year struggle.

It’s 2017 on the streets where 50 years ago,
they proudly chanted “all power to the people!”
the new billboard honors that history
by claiming “Flower to the people!”
Who needs power if you got flower?
Who needs need if you got weed?
Yet it’s hard for me to celebrate
gentrified neoliberal flower power
even if I run the risk of sounding
like Jeff Sessions, “I used to like
The klan before I found out they smoked pot”
(enter the cultural critic)

When Kanye West sampled Gil Scott Heron’s “Comment #1” (1969) in “Who Will Survive in America” (2010), he edits out lines like “The irony of it all, of course, is when a pale face SDS motherfucker dares look hurt when I tell him to go find his own revolution….. He is fighting for legalized smoke, a lower voting age, less lip from his generation gap and fucking in the street. Where is my parallel to that? All I want is a good home and a wife and children and some food to feed them every night.”

I guess Kanye didn’t think those lines
were relevant 50 years later….(or he’s bought?
I don’t think it’s proper for a white to call
a black man a “Tom”). And a Latina writes
“unfortunately, in California, people are more
interested in legalizing drugs than people.”

& if the non-violent thing you’re in jail for is no longer a crime,
shouldn’t you be freed immediately and, as reparations,
be allowed to resume where you left off?
or are you now just “the competition”


Posted by Chris Stroffolino at 7:38 PM