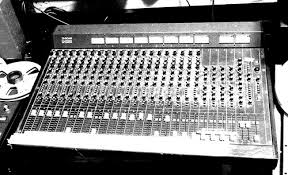 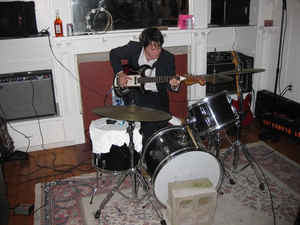 The latest phase of draconian gentrification (that a year ago banned BBQs by Lake Merritt, for instance) can applaud itself on its latest casualty: The Creamery Studio on San Pablo Street in Oakland.  The live/work studio was given its eviction notice on May 26, 2015 (in the midst of Oakland’s toothless 90 day rent-increase moratorium) with only five (5) days to vacate and (hopefully) relocate (the Memorial Day weekend at that). The new landlord, the ironically named “Art Music Center, LLC,” cares about the art and music of this city about as much as the mayor’s “affordable housing” initiatives care about affordable housing. The future of a new location is uncertain at the very least….

At the Creamery, Greg Ashley has been producing high quality analog recordings at affordable rates for the last decade, in addition to his own amazingly prolific and eclectic output under his own name, and as “sideman” in several other ensembles. Greg’s body of work at the very least goes toe to toe (or nose to nose) with the work of the legendary 90s indie-rock band I suppose I am still most known for in music (and even poetry) circles (and as a producer and advocate of analog recording, he is as distinctive and fun to work with as Steve Albini). I've worked at more expensive (and more "state of the art") studios, and The Creamery was better than all of them. Greg provided a much-needed service to the community, and was able to eke out a living as a musician/producer in an era where that is becoming increasingly impossible (unless one is willing to relocate to LA or Nashville, and sell one’s soul to the corporate conglomerates).

I’ve always admired the fact that Greg was fiercely loyal to a local community. When he was an up-and-coming star during the garage/psych craze circa 2004—2006, and appeared on the cover of local weeklies, he could’ve done what so many do with that cache: relocate to LA, but he stayed. I also admire his forward-looking, yet down-to-earth, creative restlessness. Unlike most who operate in the commodity-driven “music biz,” Greg does not waste time looking back on his body of work; as soon as he completes one project, it’s on to the next. Yet, it’s exceedingly difficult to look forward in times like these; when you put your life, your sweat and toll in a place being taken away from you, eviction can enable what some would call an “identity crisis.”

Anyway, last night, as several of his friends and collaborators took a break from packing Greg’s equipment to sit around and listen to music for one final bittersweet “wrap party” (if it may be called a party) before doomsday, it was hard not to be haunted by the ghosts of the amazing recordings that have been produced here. Without telling us, one of Greg’s friends decided to put on some of his music. She started with “Black Rabbit” by Brian Glaze (ex-Brian Jonestown Massacre), one of the first recordings Greg made here back in 2006, on which I played piano. Regardless of my own bit part in the creation of this song, I found myself haunted by its beauty, and sunk into my “own head,” and tears began to flow. I finally got it together enough to say, “this is my favorite Brian Glaze song,” and Jess Hartlaub (who had put it on) said, “mine too.” I was surprised she even knew that song, since after releasing those albums on Birdman, Brian has largely dropped out of the scene. (link to the song: https://www.youtube.com/watch?v=-r5kiZnpQdg

But I thought back to those days—circa 2004-2008—when Brian was around, and I remember when he was interviewed on the, alas, too short-lived Open Source Radio Station, KYCY 1510-AM as they played this song. It was the first time I had ever heard my own playing on AM radio (as opposed to FM college radio), and I realized how Greg’s productions sound even better on AM radio than on FM radio.

Glaze’s “Black Rabbit” was one of the first songs I recorded with Greg. Between 2006 and 2011, I sessioned on many more: though I got to work with some of the more famous acts Greg brought in (King Khan, Christian Bland of The Black Angels, Kimberly Morrison of The Duchess and The Duke), I am even more proud of the work we did by lesser-known women-lead acts such as Flowers and Bulls, Babycakes and the upcoming Janaysa Bonet Lambert. Hell, we even got to record some of my own “studio experiments” that I suppose could be called “original compositions.”

Greg is a great collaborator, and would often play several instruments on the songs he recorded and produced. When he decided to record a cover of Leonard Cohen’s Death Of A Lady’s Man album, I favorably contrasted his production work with Spector’s. Spector’s got his “wall of sound,” but Greg trimmed the fat and created a painted garden of sound.

Yet aside from the professional accolades and “kudos” I could make about Greg’s work (on Linked In, perhaps? It would take many more pages to do justice to in writing), I also must thank him and the Creamery Studio on a very personal level. He was always there for me. He may not even know it, but he helped me regain a sense of creative purpose during a very difficult time in my life after I had become a cripple and the (white) poetic publishing establishment had largely abandoned my work for crossing a dangerous line into anti-elitism. Greg made me feel more at home in the recording studio in ways that almost made up for the fact that I couldn’t dance anymore, and performing live with bands became more difficult. I am eternally grateful for Greg Ashley’s faith in me as a session musician and collaborator…..even if-- thanks to greedy music-hating landlords, we don’t get to record again.

The future is uncertain….and Greg may leave us (“to liberty not banishment”—Shakespeare might say)—to return to his native Texas (“the friendliest people that I’ve ever seen” as Jerry Jeff Walker might sing). If so, it will be their gain, and hopefully they’ll treat him better than Oakland did. But whether The New Oakland knows it or not, it is our loss. Unless, of course, you believe that expensive restaurants are ushering in an arts renaissance in this town that more than makes up for the galleries, performance spaces and live/work places being driven out.